The Ranadi Landfill (dumpsite) in Honiara, Solomon Islands. Managed by the Honiara City Council (the government) and fed with there-unrecyclable and unmanaged waste (many of which were used to sell utmost unhealthy food items) by the Chinese community

In my home country Belgium, some years ago, I used to be fascinated by an anarchist who I sometimes encountered scavenging parts of the domestic garbage when put out on the streets at night for collection. Talking to that anarchist (who I admired for his inquisitive nature and peculiar activities), I discovered that he was actually not on the look-out for food or materially valuable items other than books and papers; he was only interested in the separated paper trash. He was trying to understand the citizens whose garbage was put out on the streets, and more specifically he was trying to discover illegal or dubious activities recorded in paper.

I was studying philosophy at that time. I wonder who of us actually learned the most about human behavior. The anarchist told me (or perhaps we spoke about it together) that one can discover a lot about people by looking at their trash.

I still agree on this, and therefor looking at the Ranadi Landfill (the only by-the-government-organized dumpsite in the capital Honiara) might makes us understand what type of a country the Solomon Islands currently has become.

Slideshow of images. Hover over the photo to reveal navigation arrows (but in order for the arrows to appear, first wait until this webpage is fully loaded): 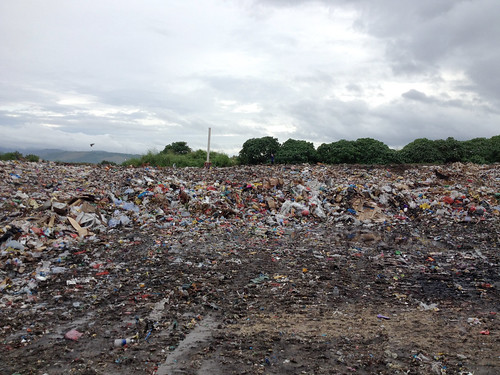 
A man and a young boy scavenging:


Overview of the work-place for scavengers:


Background information. What are the Solomons?

Please consider the following March 2016 press release from a WHO report: An estimated 12.6 million deaths each year are attributable to unhealthy environments

[...] An estimated 12.6 million people died as a result of living or working in an unhealthy environment in 2012 – nearly 1 in 4 of total global deaths, according to new estimates from WHO. Environmental risk factors, such as air, water and soil pollution, chemical exposures, climate change, and ultraviolet radiation, contribute to more than 100 diseases and injuries.

[...] Regionally, the report finds, low- and middle-income countries in the WHO South-East Asia and Western Pacific Regions had the largest environment-related disease burden in 2012, with a total of 7.3 million deaths, most attributable to indoor and outdoor air pollution.6 Solomon Islanders are being killed (for the profits of the elite) by newly created unhealthy environments, of which the burning of toxic waste (much of it coming from unhealthy food items which is sickening the population with non-communicable diseases such as diabetes) is a heavy contributor.

Who will be made responsible?

When will plastic bags be replaced by recyclable ones?