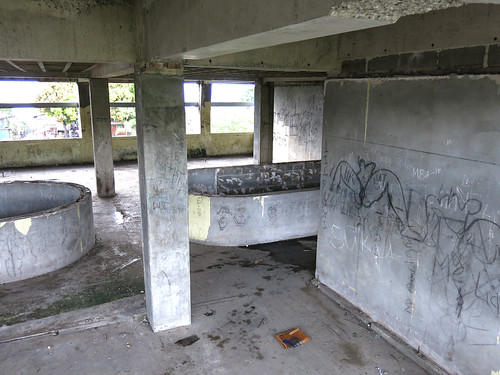 In 1960s to 80s, the Japanese government found out that providing international aid in the field of anti-infectious and parasitic disease programs was a good channel for expanding the Japanese non-military presence in Southeast Asia and the Pacific region including Micronesia after the economic development. For example, the Japanese government organized an anti-malaria program in the Solomon Islands. The JICA, the Japanese International Cooperative Association, researched malaria and established an anti-malaria training center at Honiara in the Guadalcanal islands.1 Currently, the Malaria center is a deserted building, that is for most people who not know it is home to bats, trash, low-quality graffiti and some youths who hang out inside of it or practice modern-style dances, e.g. for dance competitions. While the bottom floor contains more trash and strewn papers (it almost seems like students throw their school papers on the dirty floor in an act of frustration), the top floor showcases quite an overwhelming smell of, and visible amount of, urine collected in large puddles. For some reasons, youths prefer to hang out on that first floor, over the ground floor.

The building has been given a new function by a minority of youths which might relate their sub-culture to the emptiness of the building. The only remaining link to malaria, might be mosquitoes breeding in the urine puddles (hypothetically); although I am not aware of any research documenting that mosquito larvae thrive in it. 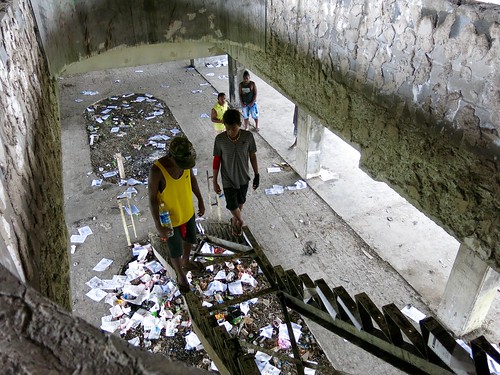 Right next to it, one can find the Woodford International School, which makes huge profits and has school fees which can only discourage the youths inside the malaria center. When hanging around inside the malaria center, one can see the adjacent 'fisheries' market (which, to clarify, also sells non-fish produces) at the other side of the main avenue. The market is so close one can communicate visually or auditive with the youths inside the market. This creates an interesting contrast between a local working population at the market, which consists for a larger part of older women and men (let's say parent figures); and the youths at the malaria center, part of which can also be easily spotted, from the market, lying or standing on the concrete malaria structure. Most of the market vendors probably have no idea of the sexually explicit graffiti inside the center.

Of the stairs which are necessary to go up to the first floor, only small metal strips of metal remain. As for the first part of climbing those pseudo-stairs, one needs to have a proper body balance, since no other support is available. This might make the youths feel more like its 'their' building, and 'their' first floor. The youths sometimes lay down on the concrete structures which are on the outside and somewhat in the vertical middle of what I presume used to be windows. At other times, they use those structures to jump on and off to the roof, and sometimes accidentally fall down creating injuries, reportedly. Some youths (who normally do not hang out there) have told me that the youths who hang out in the building prevent cleaning actions from taking place. 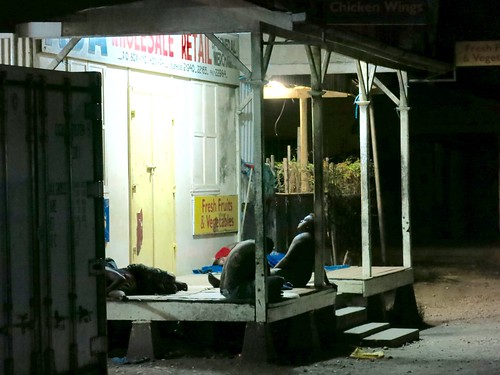 For many of the people which can be seen sleeping on the pictures here (I can confirm this, as for Chinatown), this is their regular sleeping place while in Honiara. Those who I spoke to are certainly no drunkards. The cardboard on which they sleep disappears every morning, before the shops open. They have told me they stay there from about 8PM to 6AM. Before going to sleep, you can see them playing with cards, or watching a (at times violent Hollywood action) movie on a mobile phone. When I talk to them if they like it there in Chinatown, they complain about safety (even though there are security guards present in Chinatown 24 hours, 7 days a week) in that they are being robbed at night. One night, I saw one of the elder men who sleep at the outside wooden verandas of the Chinese shops carrying a big tube, in which they informed me was inserted a machete, to guarantee their security.

The contrast with the Chinese, in their concrete buildings, is tremendous.

As can be visually seen, most of the people here are ethnically from the Philippines (as well as those who organize the fighting).

A collection of images from the Ranadi Landfill (cf. The Ranadi Landfill (dumpsite) in Honiara, Solomon Islands. Managed by the Honiara City Council (the government) and fed with there-unrecyclable and unmanaged waste (many of which were used to sell utmost unhealthy food items) by the Chinese community) and other settlements such as Manakafo (meaning "front of river" in a North-Malaitan language), which is also called Mamanawata (a settlement at the West-bank of the Mataniko river, at the estuary on the beach; previously reportedly called Marawata, and other times called "PWD" when government vehicles still parked there, abbreviated from "Public Works Department"), where trash is presumably washed ashore both from the sea, as well as from the trash thrown into the Mataniko river upstream. 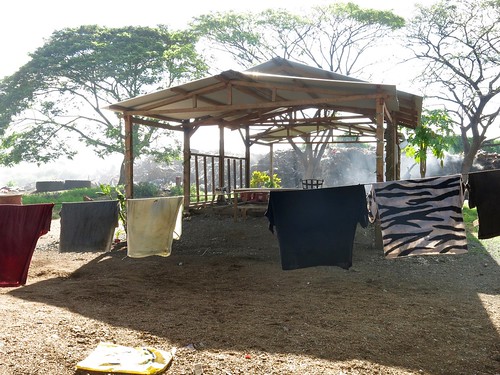 The following quote is dated Wednesday 22nd of April 2015, but is interesting as it hints at the popularity of darts in the country, and a clear link is made to drinking: it is even said that the SB Inter-Pub Darts League (SB refers to SolBrew, which is an abbreviation of the company name 'Solomon Breweries Limited'; established in 1993; and is also used to brand beers of the latter; the international beer giant Heineken acquired a majority of shares in the company since June 20112) is necessary "foster a culture of responsible drinking": In sports, the first matches of the SB Inter-Pub Darts League (SBDL) have kicked off in Honiara at 14 pubs this week. [...]

Solomon Breweries Limited General Manager, Jan Arie Smit in his welcome remarks at the launch, reiterated the need to use SBDL to foster a culture of responsible drinking and competition in Honiara pubs.

Teams attending the official opening expressed their excitement at being part of the competition, a first of its kind in that all teams are made up of pubs’ regular members.3 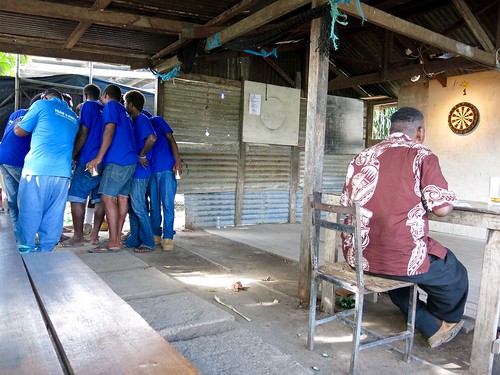 I am not sure if a face-off in the Easter darts competition which I encountered while roaming around in Honiara's industrial area "Ranadi" was related to Solomon Breweries officially, but a lot of its beers were certainly drunk: more by the referee and especially the players, rather than by the spectators. Reportedly, they drink the beer to "keep a steady position". The venue for the face-off which I encountered was a half-open little roofing iron house, which is used by an adjacent plumbing company to play darts and drink beer after work. Most of the people present at the competition there, reportedly worked in that company. Even though the players are continuously drinking beer and visibly drunk, the atmosphere is all about concentration, as not a single person tends to speak a word, even when nobody is throwing a dart. Teams are neatly wearing their own printed shirts, and even seem to somehow come up with a strategy or get some form of concentration or moral support when they all join their heads at intermediate pauses (even then, the decibels don't quite go up; everything remains more or less on the levels of whispering).

A reward of SBD$10,000 for the winners could be one of the most obvious reasons to maintain silence. The day before this competition, I also saw a darts team all dressed up at a different venue, in the curved street behind Honiara Hot Bread Kitchen at Point Cruz. The shirts of some teams even show the information "Easter Tournament 2016", meaning they were especially printed for this year. During the Easter period, a lot of employees don't work, which creates the opportunity to organize a darts event. When I was leaving the venue, an organizer drove in bringing two additional crates of beer: reportedly not for the spectators to buy, but for the players to keep performing well.

The following are pictures which are not (yet) organized: 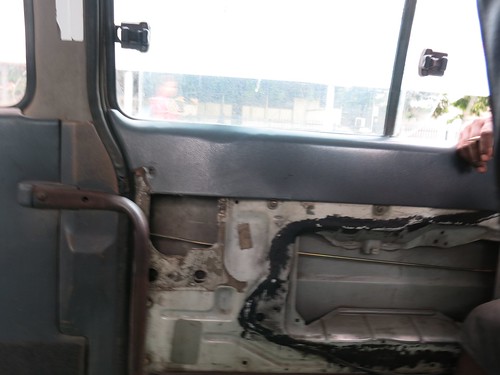