A lover of meat? Honiara's polluted dumpsite (landfill) pigs are being sold at Meatlovers Ltd. (part of Tongs Corporation) in Solomon Islands, and used in major hotels, restaurants and caterers

During my many visits to Honiara's un-managed dumpsite (landfill), I spoke to some of the permanent residents of the area. One father of a family, living there, told me the main reason for the people to settle there was to feed their pigs (meaning, to scavenge for food left-overs on the dumpsite, and feed it to the pigs).

Based on my observations and some interviews, I estimate the number of people living more or less permanent on the border (while actually, there really isn't any well-defined border) of the dumpsite to be around 60. Some of the people I spoke to claim to have been living there for 30 years, and 1 person told me that he and his father remembered seeing the soil quality in their settlements degrade significantly, which they assume is due to the dumpsite's progressive influence. Nevertheless, a limited amount of crops still are grown there (such as cabbage), some on raised wooden beds.

More importantly for the economy of the settlers however, seems to be the meat production. Other than the pigs, the residents also breed chickens, and there are plenty of dogs roaming around the area. I was also told that people fish in the pond on their settlement, where I saw kids swimming playfully as well.

The settlers also use the groundwater, through a well which is covered by a plastic garbage container.

While conducting my interviews and visits, I was particularly interested in the pig production next to the dumpsite. Part of those visits, I video-taped. During one of my first visits, a person named Saay (I am unsure how to write his name, but it is pronounced as "/Saɪ/"), immediately told me that they sold the pigs mostly to Meatlovers Limited; which was repetitively confirmed by later visits and interviews. 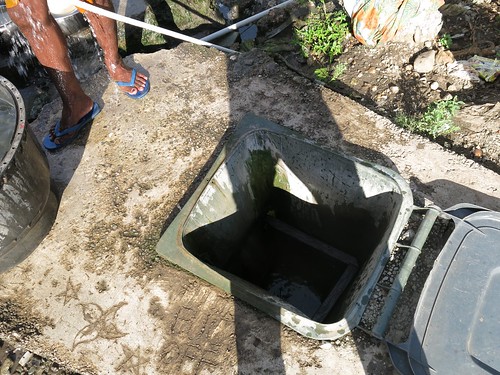 When I talked to Winny about business in the Solomons, she immediately starts complaining about how Solomon Islanders are unable to work properly, and how she thinks they are lazy. She, on the other hand (I have had the same experience with other Chinese business magnates in Honiara) insinuates that she is doing business in the most ethical way, as she is e.g. "providing jobs".

Meatlovers' store in Honiara, as well as its van(s), advertise that the meat sold by Meatlovers can even be delivered by air and by sea. Meatlovers claims the following about itself, in a job advertisement for accounting manager of the company: Meatlovers is the largest distributor of quality meat products in the country. With a mixture of imported and locally manufactured meat products, we service hotels, restaurants and fast foods outlets throughout the country. We are an industry market leader.1 In the same advertisement, it is stated: Our clients are government agencies in the region, Department of Foreign Affairs Australia, New Zealand, Japan, Taiwan and European unions. Humanitarian agencies such are United Nations, World Visions, Oxfam and Red Cross and regional contractors Toll Remote Logistics Australia, Sinclair Knight Mertz Australia, Kitano Construction Japan.1

Some footage of on-site interviews

The following are snippets of some interviews. Since the first video is part of an interview conducted on Easter Sunday (27 March 2016), when most of the people (including the person who shows me around on the video) I encountered in the settlement were very drunk, reportedly celebrating for Easter. A lot of dancing was going on in the settlement, accompanied by loud music. I let the video edit begin at a point (slowed down) where it is visible how close the people live to the dumpsite, and how there is no existing border in place.

There are at least 30 pigs in the whole settlement. The pigs are bought from the Taiwanese Technical Mission, and then kept for 3 months, before sold both to local (read: indigenous) people of Solomon Islands (sold without weighing), as well as to the Chinese-owned Meatlovers Ltd. (sold per kilo) and restaurants. The person on the second video kills the pigs after 3 months, which is done on-site, under the completely un-hyigienic circumstances of the dumpsite, before the pigs are taken to Meatlovers. Contact between Meatlovers Ltd. and the dumpsite pig sellers is done by phone, before the dumpsite seller actually brings over the pig to sell it.

There is an urgent need to strengthen waste management and food security in the country. Or else: expect the pollution and health hazards to continue.

The good thing about this whole phenomenon is that the rich in Solomon Islands are not spared from this pollution. Tongs Corporation (under it's sub-company Meatlovers) falsely claims it distributes "quality meat products", while customers are completely unaware of the conditions under which the meat was raised. A certain restaurant in Honiara (Haydn's Steakhouse of Coral Sea Resort & Casino) even mentions the name "Meatlovers" on the menu for certain meat dishes, while customers of course have no clue that the meat could well be raised in the most polluted environment of the city where there is not even clean water available.

Why do I say that this is a good thing? Because it makes the rich understand that they have to take care of the poor people of which they like to make profit, or else expect to be morally and physically polluted. Even if civic and customer indignation would accuse the Chinese butcher (or any foreign butcher for that matter), then that butcher would still need to bond to local people before they could really understand how their meat is produced. For that, mutual respect and trust needs to be built.